Weeknotes for the week ending Jan.21 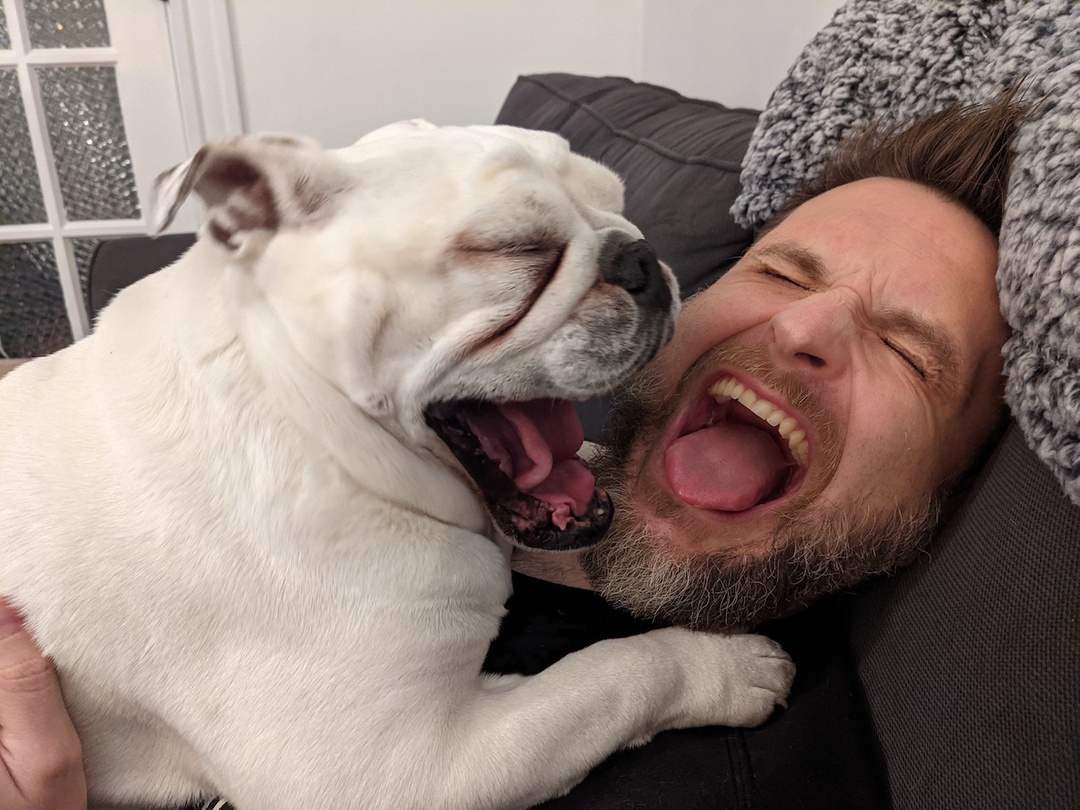 When new posts are created and deployed here, they end up getting “announced” on a Slack channel with some local(-ish. New England.) friends from the web development community. I’d noticed that there were some small dinky details in the Slack RSS feed app that tipped me off that things could use some massaging. So. Of course. What better way to spend a weekend afternoon than watching sports and tinkering with Jekyll and other nonsense?

And in a gratuitous display of exercising some of these new capabilities, I will share a pithy tweet –

It's been said a gajillion times before, but -- @Netlify is so damn good. So easy. So smoothe.

Seriously though. I marvel at all the good work the people at Netlify have done over the years to make deploying static sites so easy, painless, intuitive, and inexpensive. Go give them your business.

Weeknotes for the week ending Jan.14 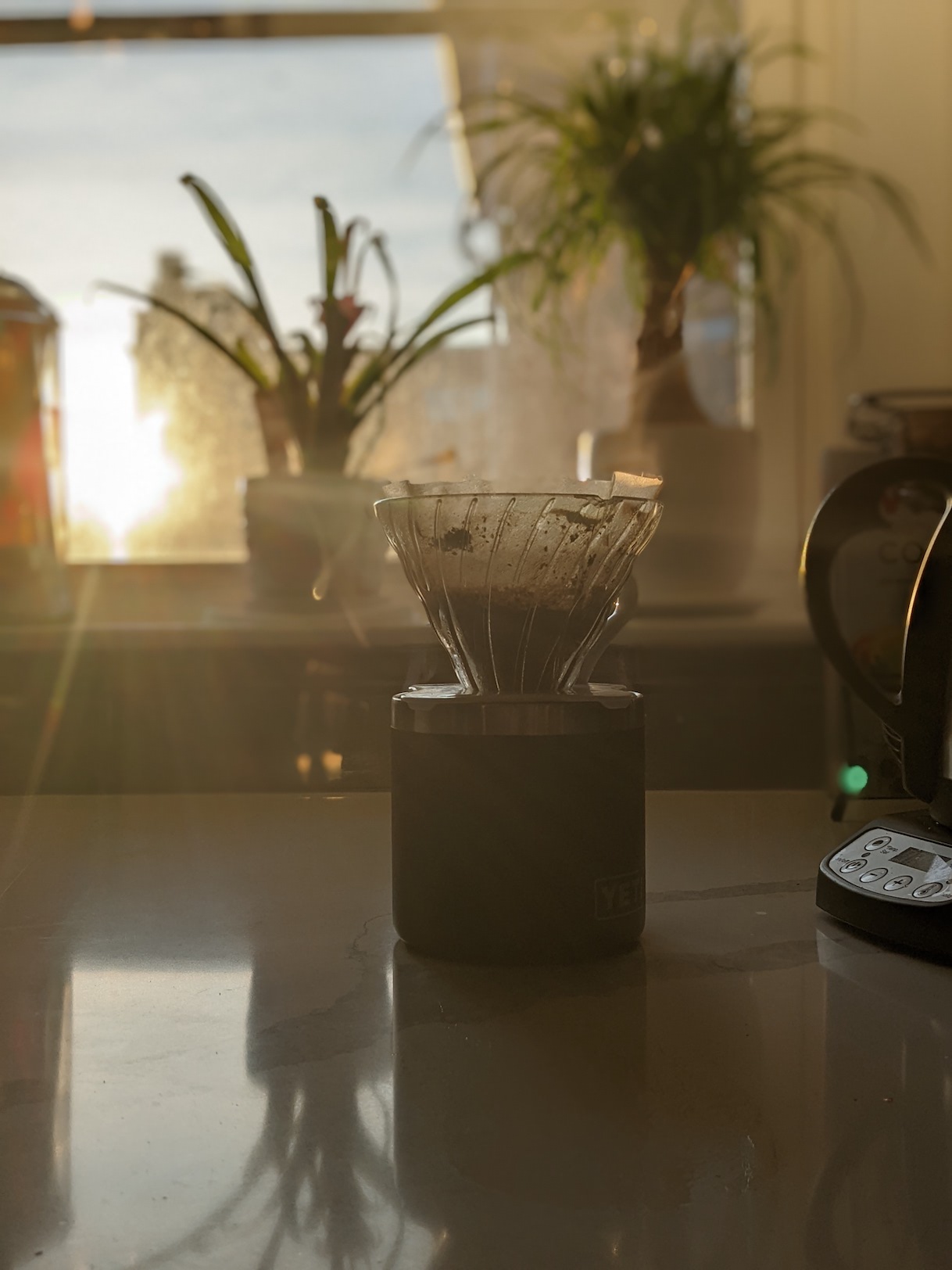 I’ve never taken a walk through knee-deep molasses before, but I have a feeling it’s similar to the first week back at work after the new year. Glad that’s over. As someone who was not smart and did not take the week between Christmas and New Year’s off, the anxiety from the work you thought you would get done in that time, with the knowledge that people would be coming in with a fresh quarter of work to do, is palpable. Thankfully the majority of the work-force was operating under the same reality and eased into things.

In personal project news - I’ve spent most of my “tinkering” time with setting Shubox up with a new infrastructure, new provisioning, setup, and task automation. Improving my usage of Ansible has been a worthwhile endeavor – doubling down with that on common tasks instead of dropping into a shell. A first go-round involved getting everything installed on “bare metal” (read: vps), whereas this time I’ve graduated to docker and docker-compose. Why? Try managing disparate installed versions of software on X machines, where operating system update v### introduces dependency hell. It’s not fun. As much as Docker leaves an acrid taste in my mouth, I’ll make do.

The newest and most interesting piece to all of the above is Traefik. When it works, it’s wonderful! Getting it to work, however, is something akin to this.

I hope to write more about it here in the near future, not out of altruism, but for (selfish) documentation purposes. The more time that passes between when I do “thing X” in Traefik and the next time I look at it, the more likely I have no goddamn clue what the actual hell is going on.

Weeknotes for the year ending 2021

Wellp. Another one in the books.

Instead of regaling you with all of the awful things that happened in 2021 let’s take a look back on one specific thing that made me happy this year. Let’s consider something truly remarkable - the move from our tiny condo, our home of 13 years, into our (more) spacious new home around the corner. Specifically, the room I occupy for most of my time during working hours, my office.

This room was all wood. Everywhere you looked. Wood. And shelves. So much shelving. SHELVES! Did I mention “shelves”? 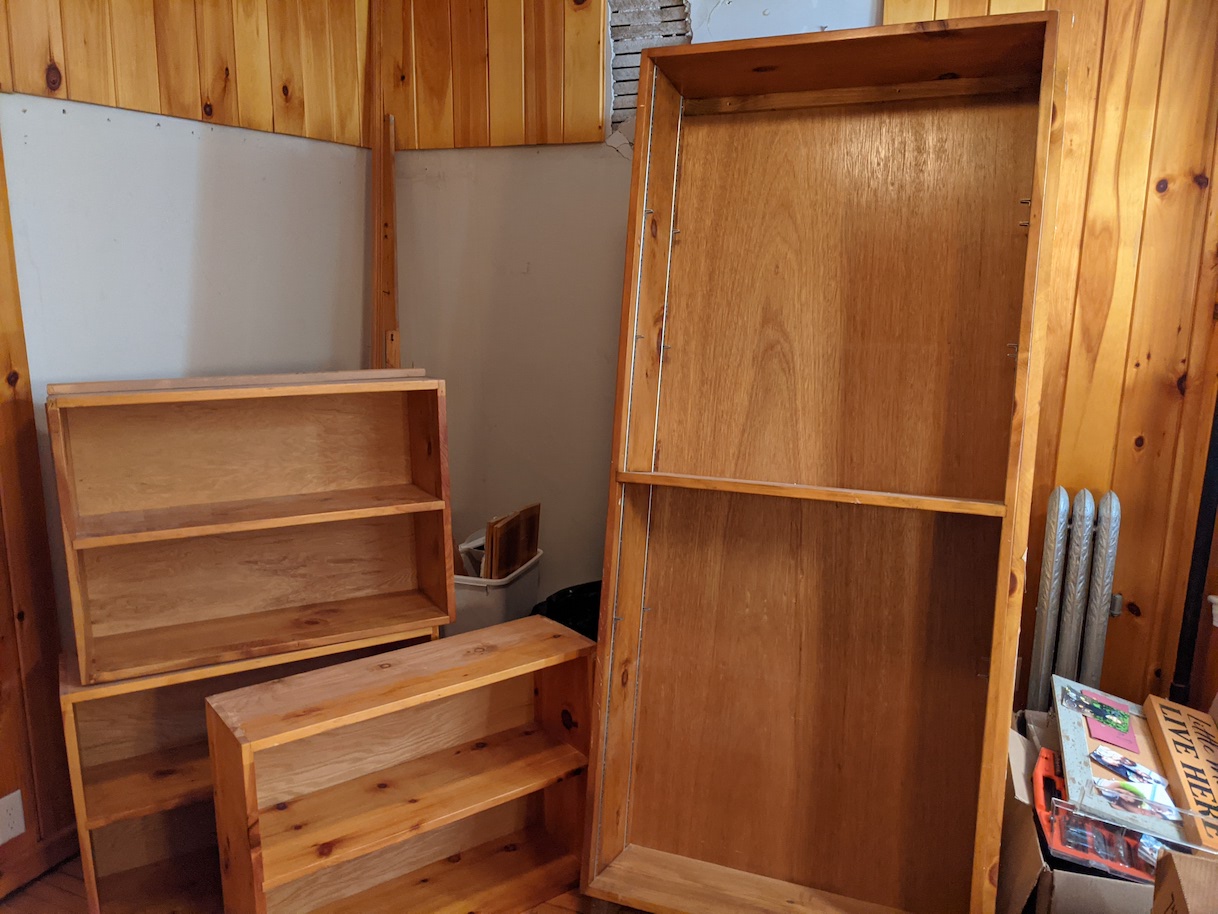 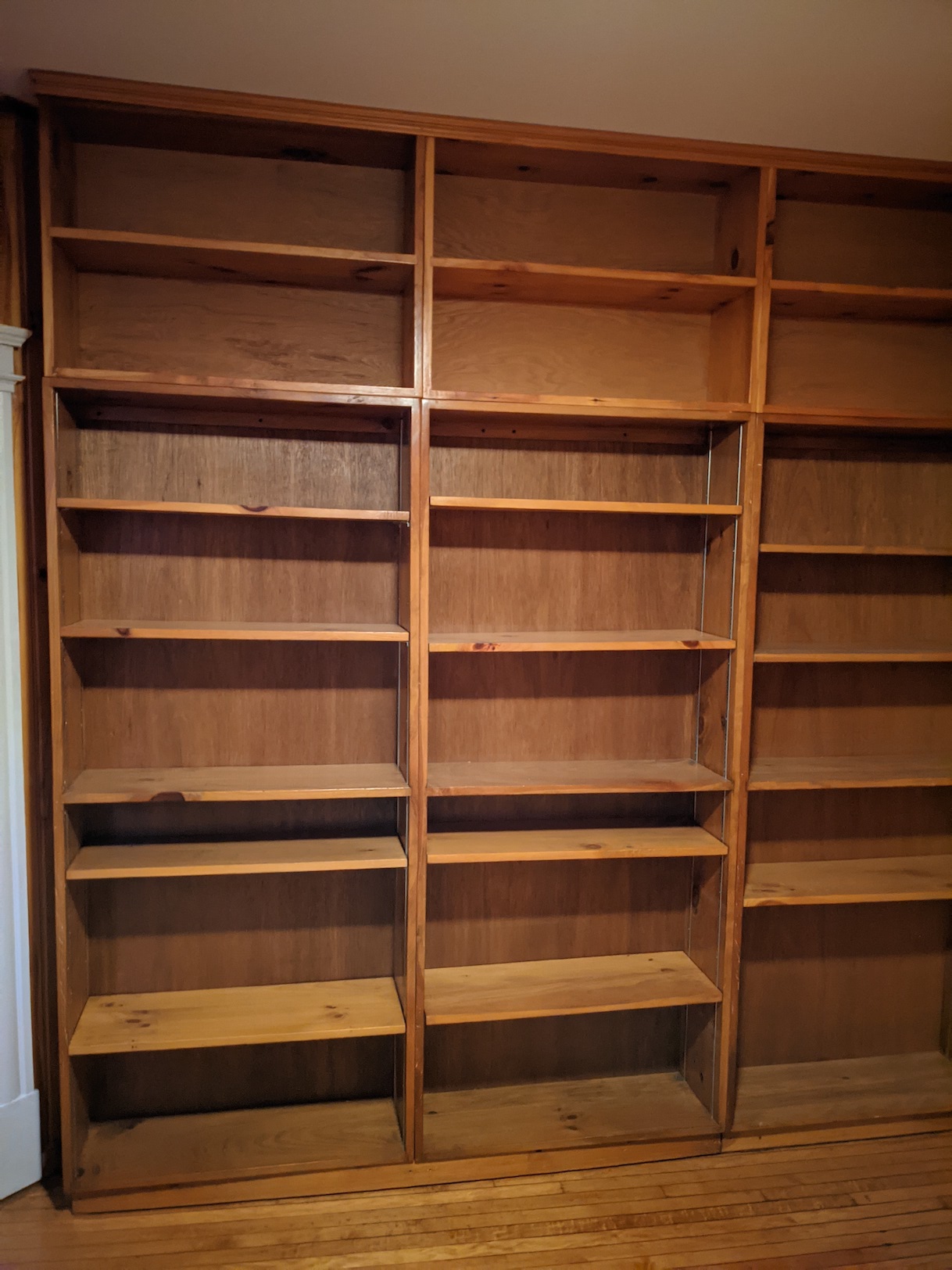 This had to be just a guest room for the previous owners. The only thing that’d fit, other than shelves full of books, is a bed. I mean, I could have kept everything as-is, bought a lounge chair, a smoking jacket, a wet bar, and a collection of bourbon and … shit. I may have made a mistake.

In any case. I tore everything down to the studs and made this room into my office. After a year of working in a kitchen next to a refrigerator clanging, vibrating, and humming during all of my zoom calls, it was nigh time I had a space to myself. Praise the gods - my own space. 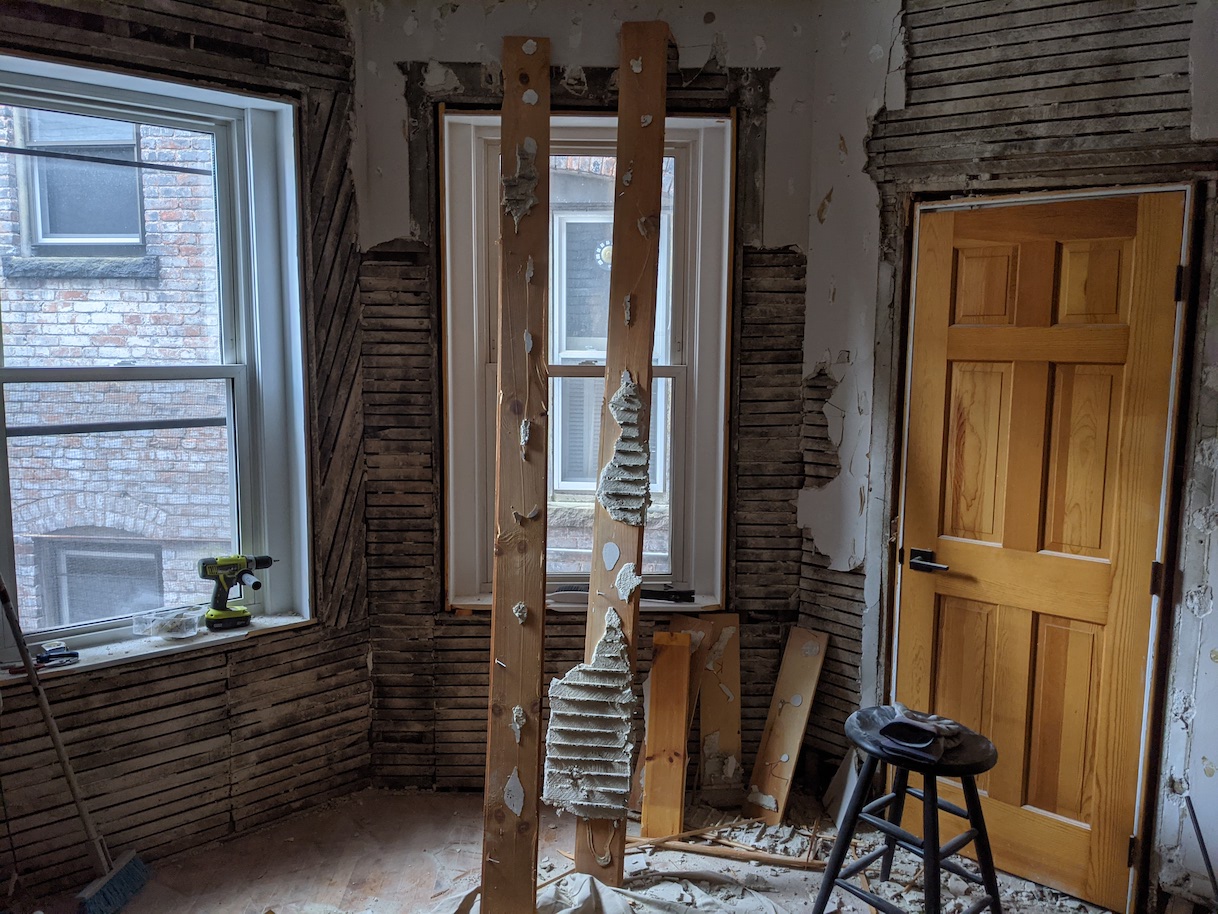 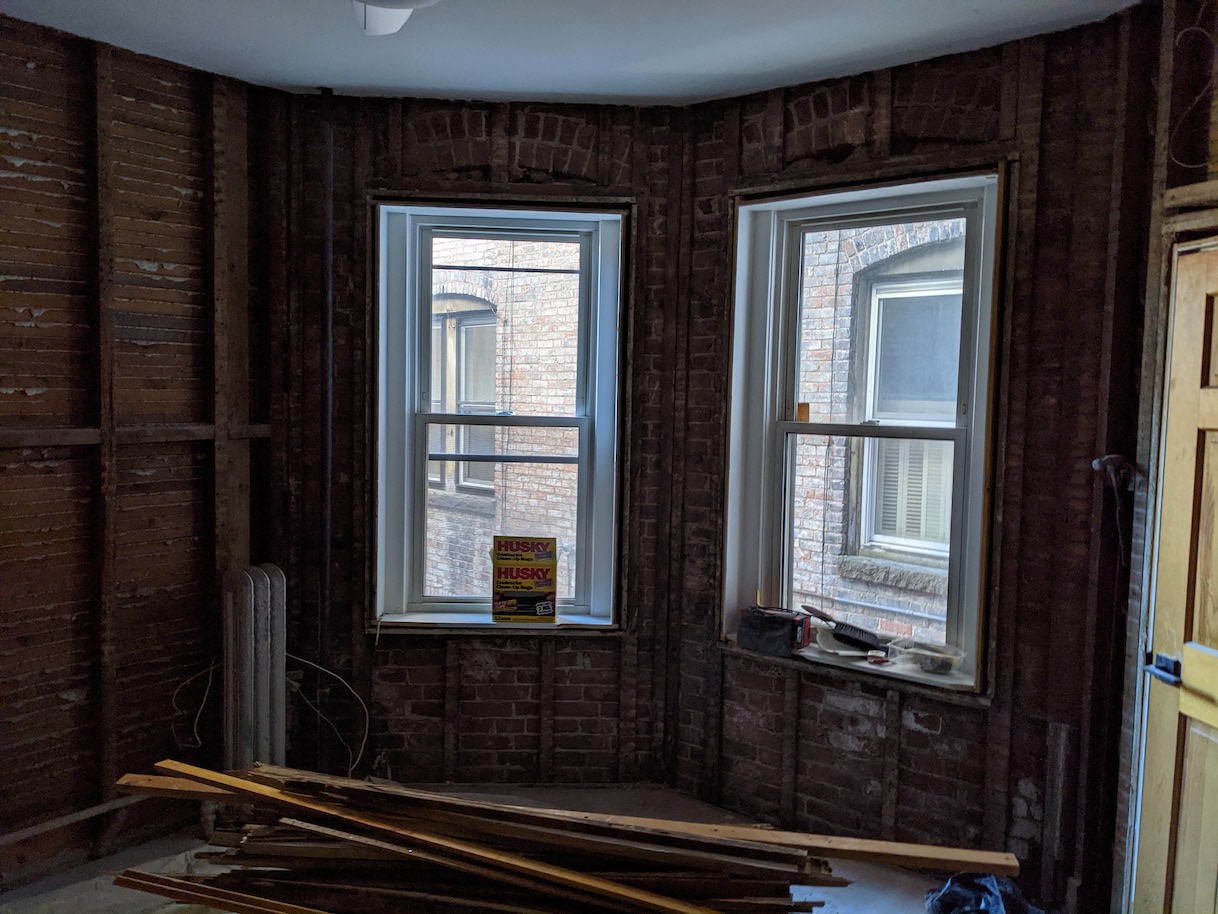 My requirements for this space were pretty simple:

I must say that the process was rewarding and fun. I managed to do all of the demo myself, and wire things up as I wanted – cat6/RJ45 drops, speaker wires/banana plug wall plates – before the electrician and contractors tidied and closed everything up. It took a while, but once everything was done there was a clear and profound feeling of satisfaction.

I attempted to take some photos from the same angles as the photos above, so here’s how everything looks as of this weekend. 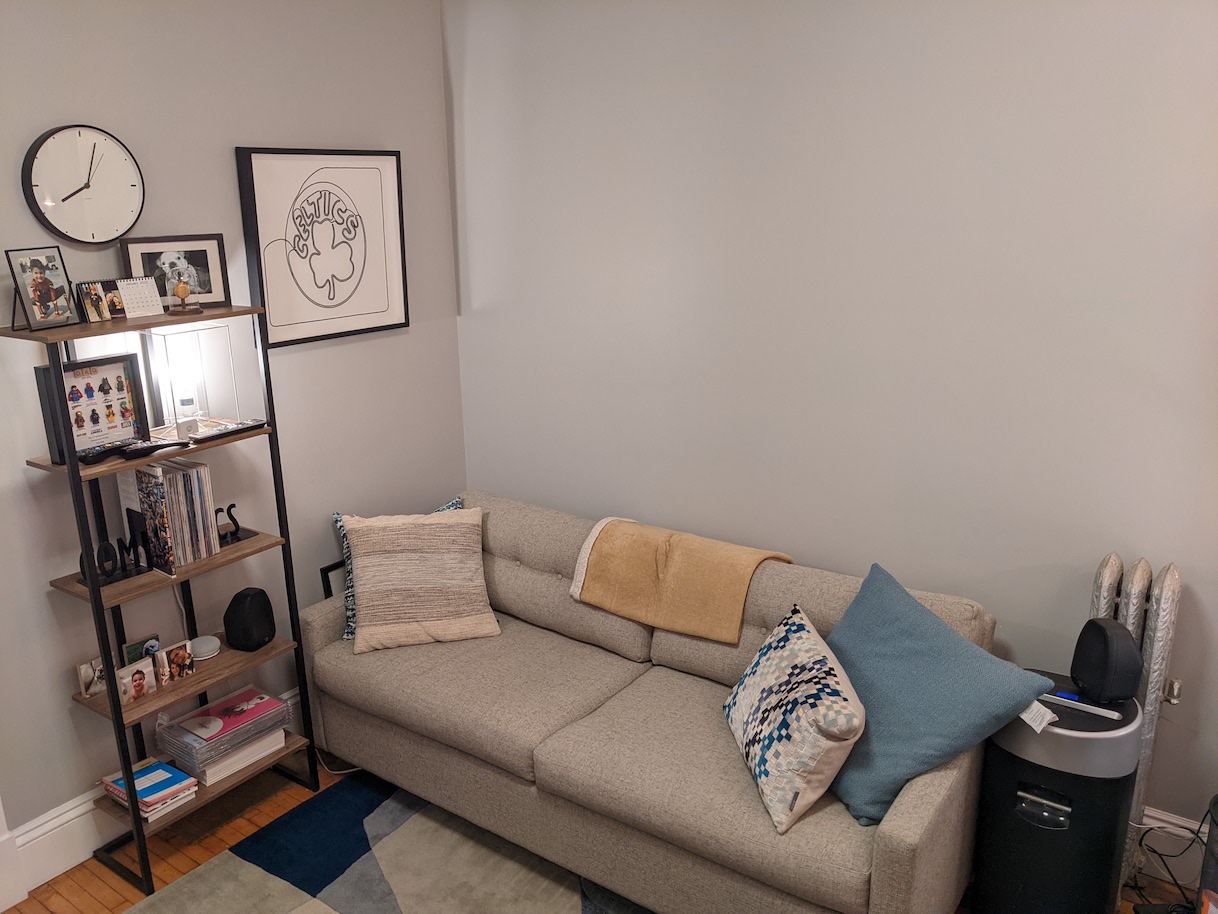 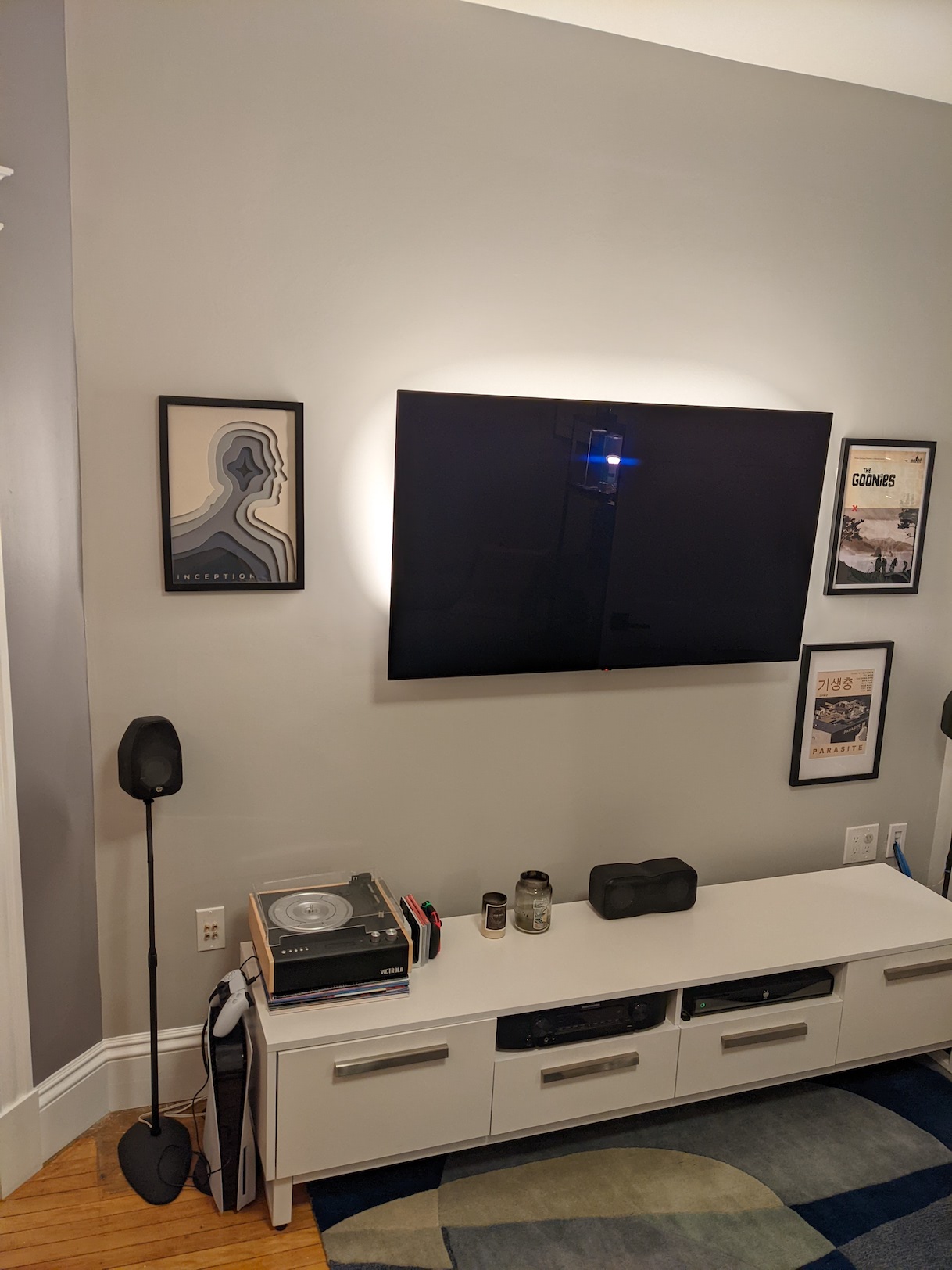 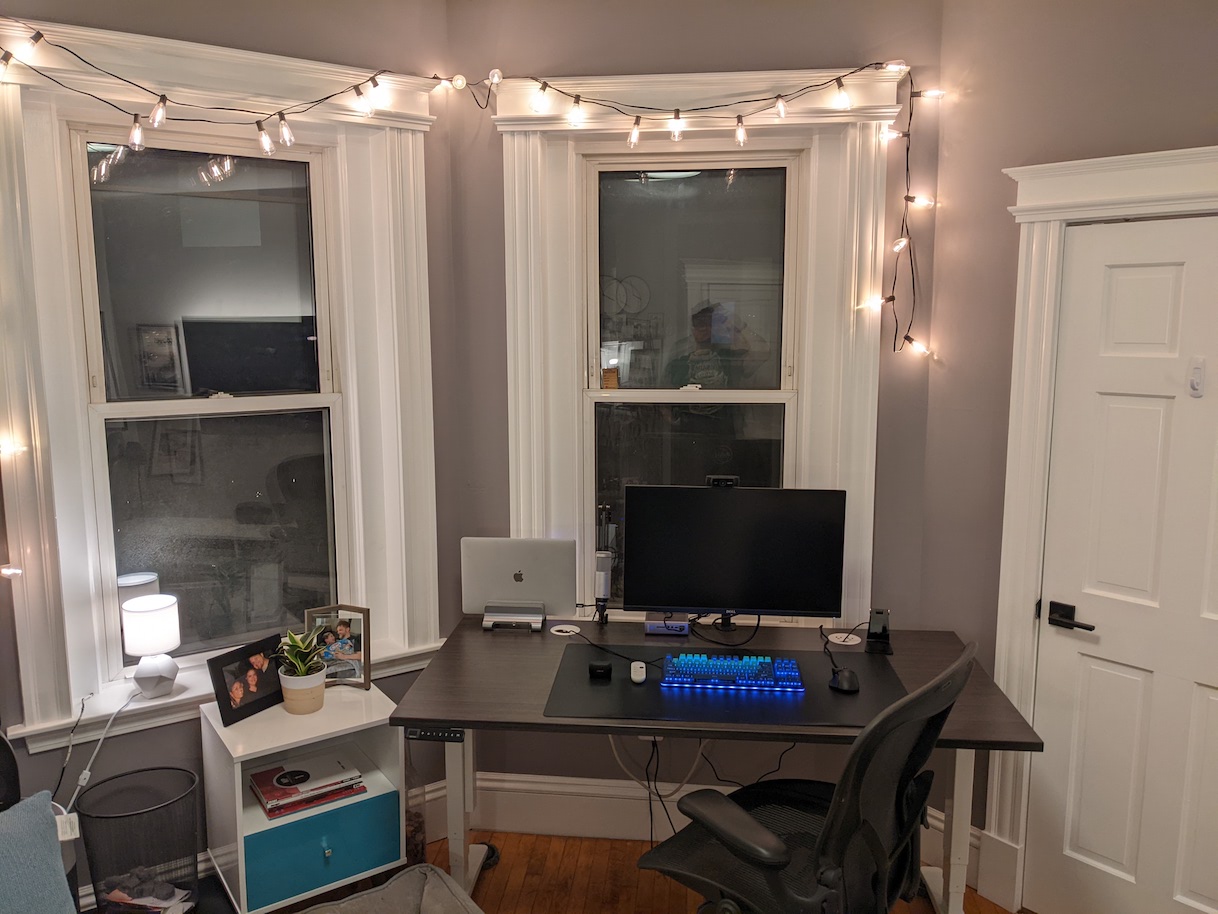 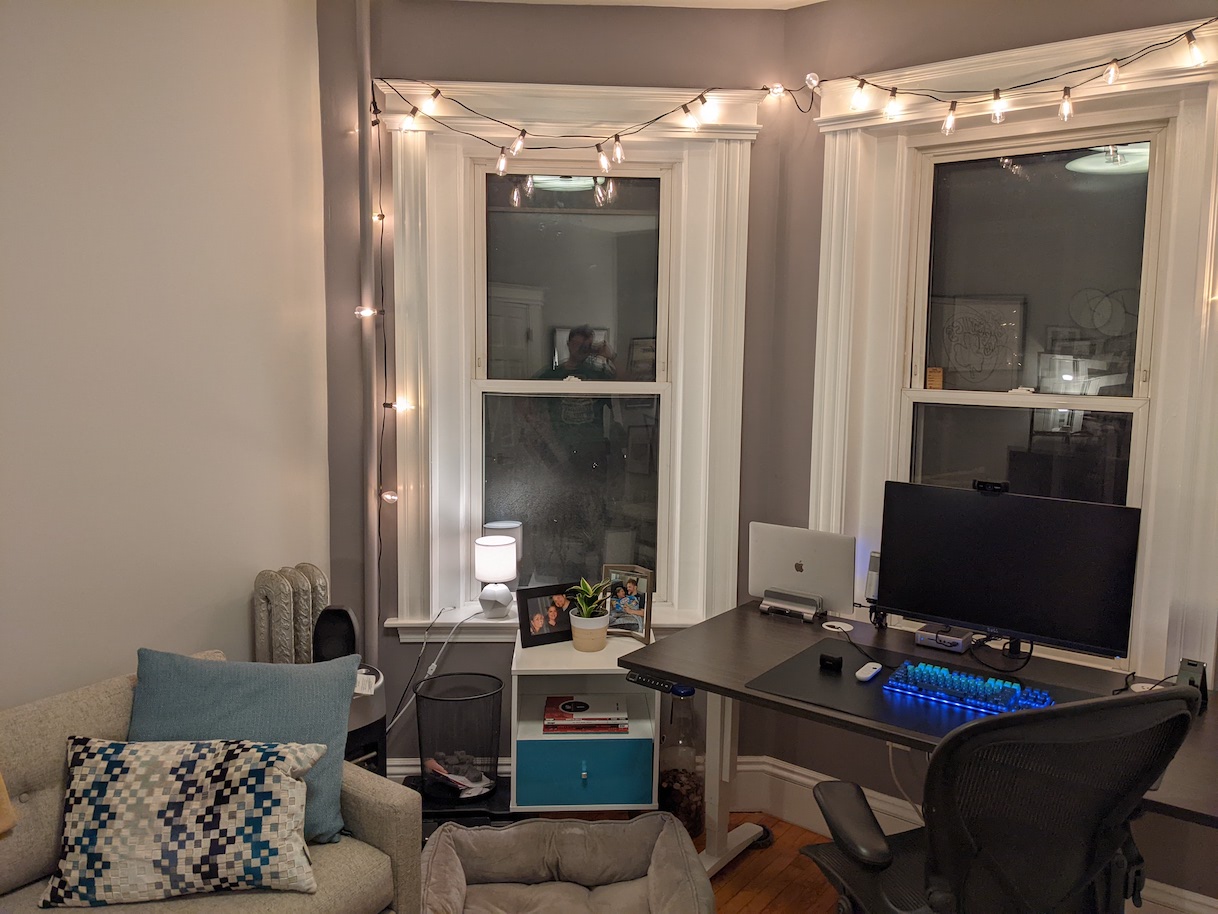 Some of the walls are still a bit bare and need some attention but for the time being things feel pretty cozy.

Me. After loading up the last of all our stuff from the old place. 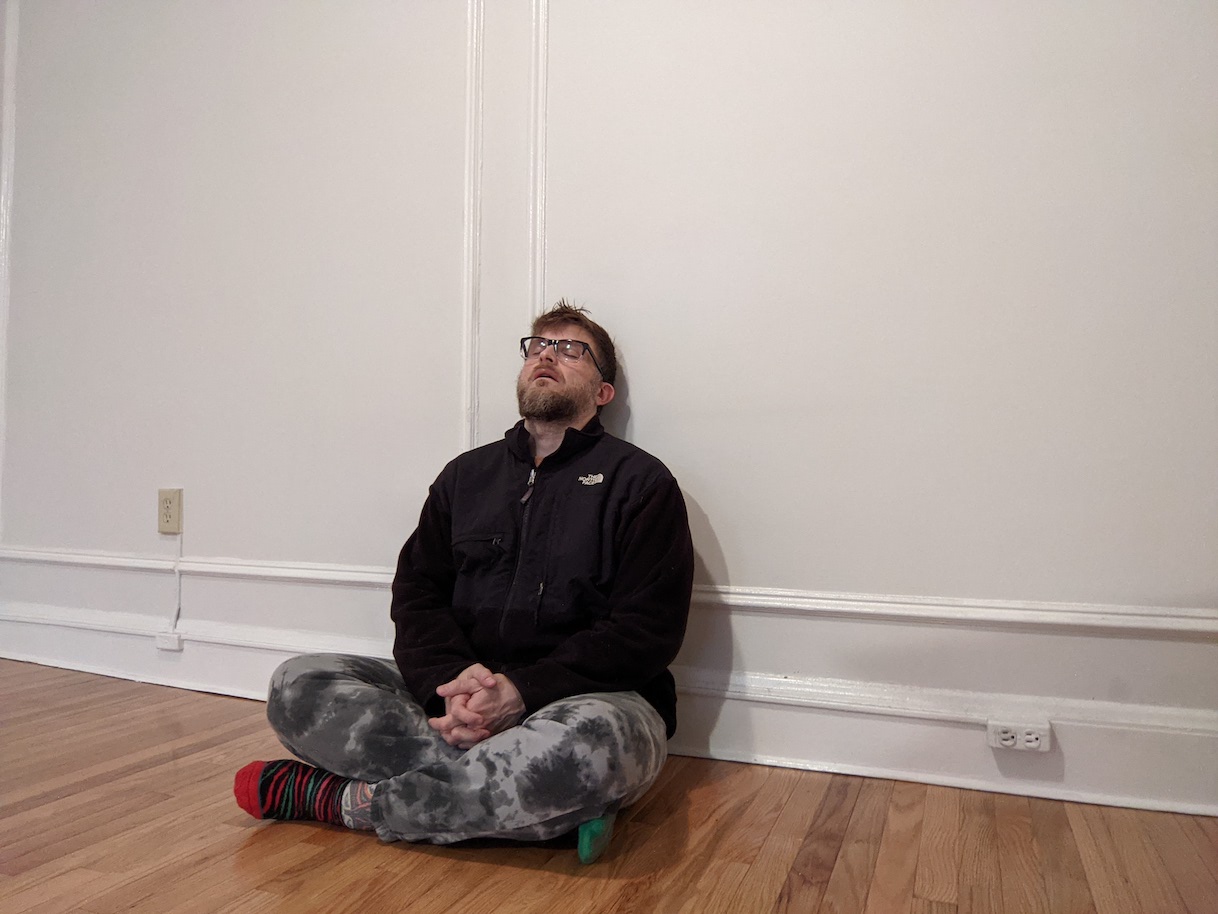 If we’re reflecting on 2021, I can’t neglect to mention how things turned out for our son. It wasn’t the best, but it was a much better year for G than 2020. In March, a year to the day that the pandemic shut everything down, he started attending K in person. The experience of being IN a school, with OTHER children, doing KID things, was an overwhelmingly positive shift from the previous year. The summer saw us spending time on the Cape quite a bit, where he spent every moment he could swimming in his Grandparents’ new pool. He began the summer as a minnow, and emerged a marlin. We ended the year with him being fully vaccinated (celebrated with a trip to see Spider-Man: No Way Home), and in the throes of his own personal Pokemon Mania. We begin 2022 on the verge of his turning 7 years old. All of these things are matters of fact, yes - but the most important of which is that he remains a sweet, sensitive, smart, funny, and loving little boy. The ups and downs of the year remain, but if all we have is his laugh and magnetic personality, then it was a great, great year.

Weeknotes for the week ending Dec.25

We’ll get the obvious point out of the way, which is, of course, it’s Christmas weekend.

As I get older, the more complicated and layered the reality(-ies?) of this holiday are for me, personally. This year has an additional (bonus!) layer of frosting called “the Omicron variant”. It’s not as if we had any plans to speak of that were canceled as a result, but that in a time when we could be taking advantage of a little downtime we are no longer comfortable considering the options. Would we have gone to the movies with G if Omicron wasn’t a thing? Possibly. Would we have liked to take a trip to NYC to see the tree, and take in the general Christmas atmosphere? Yes. Alas, that ain’t happening anytime soon. Then there are the inextricable facts around my familial situation. I grew up with two sisters and my mother. Both of my sisters have passed, and I was not able to make it to see my mother for the holiday. This is the time of year where I feel that empty space most profoundly and acutely. I miss everyone individually, tremendously, but as a whole family unit it’s a different experience to consider.

Needless to say it is 1 week of 52 where I have a lot to chew on, emotionally. All that being said, if you were able to celebrate the holiday with your family (however you define “family”, whether it’s the family you are born into or a family you chose) and have some smiles and laughs and open some presents next to a big bright shiny tree? Count your blessings. Savor your time. “Things” are great, but those experiences are priceless.

… Whew that was on the heavy side! I promise I’ll lighten this up next week.